The Colors of War. The Siege of Warsaw in Julien Bryan's Color Photographs

The unique album shows the German attack on Warsaw of 1939 in colour photographs. The colours in the pictures that show bombed buildings and desperate people make a huge impression, bringing the viewer back to those tragic times.

Julien Bryan, an American press photographer, came to Warsaw in the first days of September 1939 to observe the beginnings of hostilities. He entered Poland through the border with Romania and quickly came across the first bombings. At the time, however, he thought that he must have been dealing with some stray planes. He had absolutely no idea that a massive air attack, covering the entire territory of Poland, had already been taking place. He reached Warsaw after a few days of traveling by train. He was convinced all the time that the war would be slow and that it would take many days for the German army to reach the Vistula. Surprised by the city blockade, he was forced to stay in the bombed Polish capital for two weeks. During this period, he decided to do his job as a press photographer, often putting his own life at risk. Day after day, his admiration for the courage of the Polish population, mercilessly bombarded by German air force, increased. He received a car with a driver from the city President, Stefan Starzyński, and a special permission to photograph everything that was happening in the capital under attack. Thanks to this, he was able to move freely around the city. He took shots in the city centre, Wola, and above all in the poor districts of Praga. He managed to get out of Warsaw on 21 September, when the parties to the conflict declared a cease-fire to allow citizens of neutral countries to depart the country.

Interestingly, during his stay in Warsaw, Bryan used, among others, Kodak's colour films, which he took with him to test this innovative solution. Pictures taken by Julien Bryan are the only colour photographs that show the siege of Warsaw in September 1939 from the point of view of a benevolent observer, showing the despair of Varsovians, rubble, the wounded and the homeless. Other well-known colour photographs depicting these events were taken by the German propaganda unit, and they show a completely different story - instead of rubble and despair, the glory of the German weapon is emphasised there.

The album contains colour and coloured photographs from Warsaw from September 1939. The dyeing of black and white plates took place shortly after Bryan's return to the United States in 1939 and was clearly made under the watchful eye of the photographer, because the colours are rendered amazingly faithfully. The second part of the album tells the later stories of some of the protagonists of the photographs found by the photographer during his visit to Warsaw in 1958. The photographs are supported by fragments of texts by Julien Bryan himself, telling about the events immortalized in the pictures.

The album is bilingual, Polish-English. 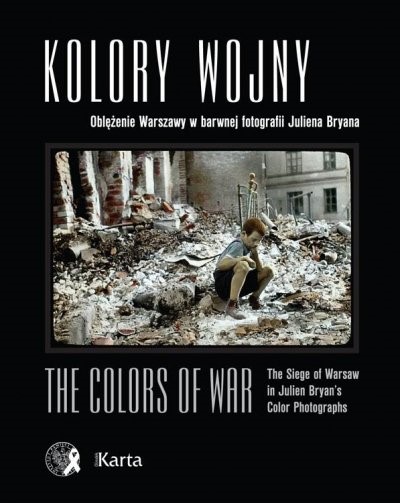