“111” is a historical board game for two people. The action takes place in September 1939 and reconstructs the battle in defence of the Polish sky fought by the 111th Fighter Escadrille, among others. The German Luftwaffe attacks the capital of Poland – Warsaw. The task of the Polish Air Forces is to thwart the German bombers before they reach the city. The Poles are supported by the anti-aircraft artillery and field airports hidden from the sight of the German enemies. The addition of clouds can add extra emotion and challenge to the aerial clashes. It is no coincidence that the “111” refers to another historical board game – “303”. On the anniversary of 1 September 1939, Polish pilots, flying under the banner of the 111th Fighter Escadrille, began their offensive in the famous No. 303 Squadron. They were the ones who turned the tide of the Battle of England in favour of the Allies.

Each box contains:
• a game board resembling the Polish ordnance map
• 9 double-sided tokens with airplanes 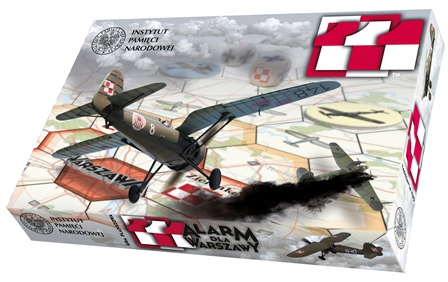